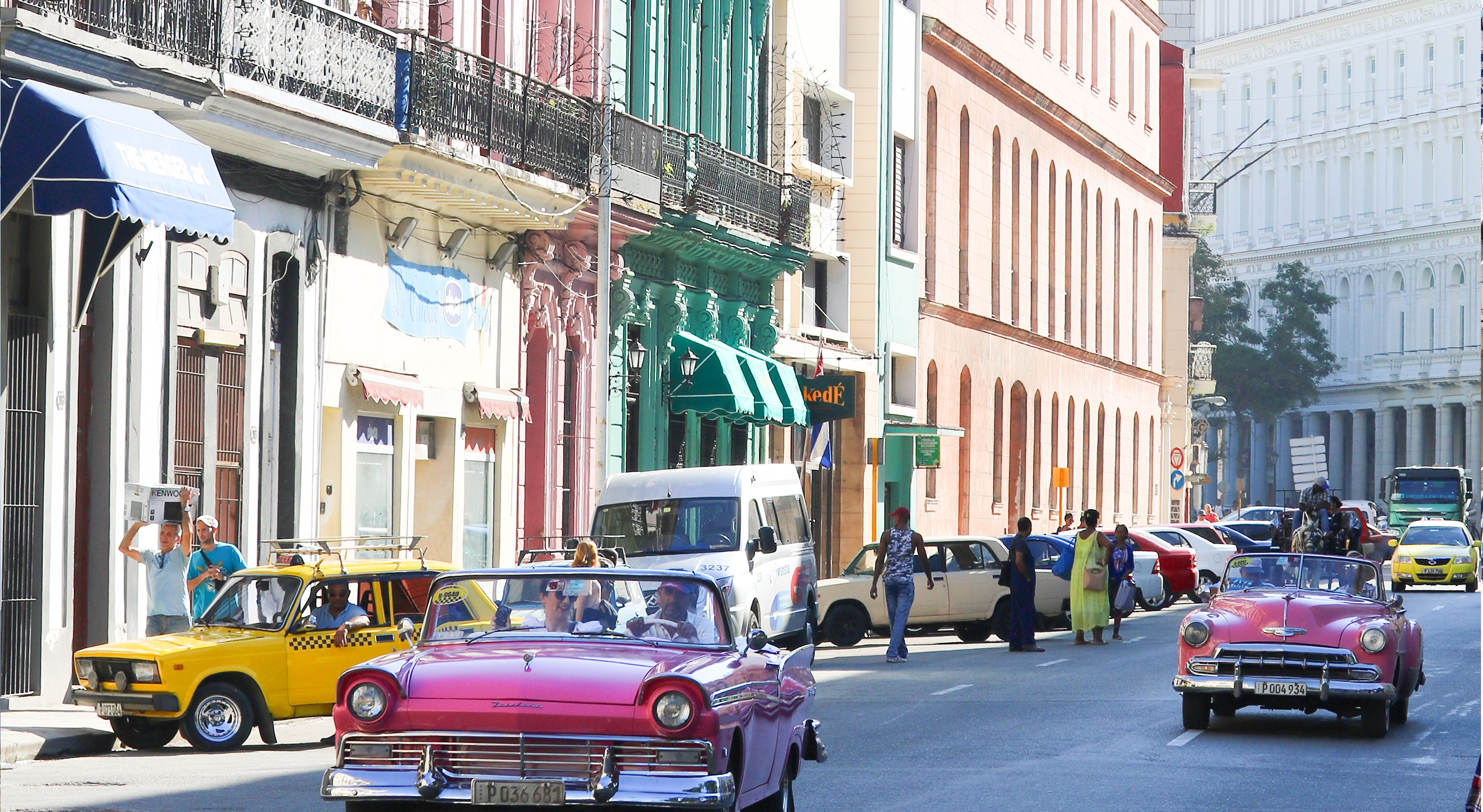 If you’ve missed the 1st part our road trip, you can read it here.

We drove to Havana. On route, we took a small detour to go back to Soroa, to bring food and money to a small family that we met when visiting the city. We were touched by their story. Téo was still not feeling good, but at least being in the car was not too demanding for him.

We met Sacha and her boyfriend during the afternoon at our casa in Havana. We chilled for the rest of the day and spend quality time all together. It had been 4 months since we last saw each other. 🙂

Téo was still feeling under the weather. Even though we went into town to visit old Havana. We had been there for barely 2h when Téo started to feel really bad, at that point we head back home. Sacha and her boyfriend stayed in town to visit some more and tried a couple café and bars.

We had planned to go visit the de Tres Reyes del Morro’s castle. We got in an old fashion taxi and drove down to the castle. The entry fee was 6 pesos (national currency), which means about CAD$0.30 per person. Yep, you got that right. It was very cheap… and what a disaster that was. It can’t be called a national and historical monument when it’s kept in such a bad shape. We felt ashamed for the people of the country. There was garbage all over the floors, like everywhere. The whole site was smelling like pee. To be honest, there wasn’t much there to see. We left the castle feeling sad and disappointed.

Following the event, we walked down to a restaurant called Casta & Tal. A trendy bistro style restaurant, one of the rare one in Cuba. We had Cuban croquettes to start, they were made with Malanga potatoes, it was delightful. We all had chicken main courses that were good. The high of the night was the tasty mojitos that Sacha and I enjoyed a little too much! It was all about quality time 😉 .

We had planned on visiting the Museo de la Revolucion, and then walk on El Prado street and Paseo de Marti avenue.  My sister and her boyfriend left early in the day to do the visit and we left a little bit later in the afternoon as our little family needed to rest. We had lunch at 5 Esquinas Trattoria, an italian restaurant located a couple streets down from the Museo de la Revolucion. We all left the museum with disappointment, once again. There wasn’t much to see in the museum for the price we paid, CUC 8 per person. A museum emptied of historic objects, all there was to see was wordings on the walls and a lot of propaganda against the CIA and the USA, like too much. Which turned out to be more ridiculous than anything else. The 4 of us did not really enjoy the tour

Following that, we walked on El Prado and Paseo avenue while enjoying an ice cream. We enjoyed this part of the day. We had dinner at Rosa Negra, a restaurant that was recommended by the cook of the casa. We had a really good dinner, the chicken was super tasty one of the best I had in Cuba (we had a lot of pollo in Cuba, I can now tell you which one was good or bad : P ).

We left Havana for a 2h30 drive down to Playa Larga. While the men went down to pick up the rented cars (it took 3 hours, you have to keep in mind that we were on Cuban time) when they came back we finally hit the road! After all, we arrived late afternoon to our casa. We went down for a walk on the beach and had a delightful dinner at the casa of shrimps, crayfish and fish.

We head down to the beach in Playa Larga…Guess what the name of the beach was; Playa Larga #YoureTheBomb ! A nice-looking beach located in front of a small hotel, but still available for all to use. The water was good, and the weather was awesome. We were living La Vida Loca! We could have taken an extra day in Playa Larga. The casa was awesome just as much as the beach was.

We drove down to Caleta Buena, 1h drive from Playa Larga. It’s sort of an all-inclusive, but only for the day. You pay CUC 15 per person and you have access to everything, food, drink, beach, snorkeling, etc. We enjoyed swimming in the ocean and snorkeling, you can also jump into a natural pool with tons of fish in it coming from the ocean. Seems like they poke at you, but there was too many for us to dare to jump in. The only downside is that there is no sandy beach, it’s mostly rocks, but there is lots of long chairs and picnic tables everywhere to enjoy. 😉

At the end of the day, we drove down to Trinidad, where we spend the next couple days. After a long 2h drive, we arrived in Trinidad.

The casa we had in Trinidad, was located in a Cuban neighborhood and by that, I mean locals not tourist. Which is what we were looking for, we wanted to see the true Cuban lifestyle, which can sometimes be pretty, and sometimes not be pretty at all. We toured the neighborhood and then went down to visit more touristic quarters. We had a very unique feel of the Cuban lifestyle in Trinidad.

We drove down to Playa Ancon, but before hitting the beach, we drove around the Ancon peninsula to admire the views. The white sanded beach at Playa Ancon is very beautiful, the water was very warm and clear. The only downside with kids is that it drops down quickly. We had lunch on the beach, a classic queso and jambon sandwich. For dinner, we walked down to Taberna La Botija. It was a night filled with ups and downs, literally! As it was our last dinner all together we were all feeling a little nostalgic. But also, because as soon as we entered the restaurant there was a massive rain storm and the whole city ran out of power. And us too, no power, no food! For us, there never is an issue as long as there are drinks, which there was! We had a couple drinks then the power came back, and we got to enjoy our last meal together. It added a little spark to this unforgettable evening 😉 !

Sacha was on her way back to Havana, as she was flying back to Vancouver the day after. On our side, we were also on our way back to Varadero. We would spend the next 2 days in an all-inclusive. At first, the plan was to spend the next 3 days in Trinidad, but since we had many little issued with our casa we decided to leave earlier. As we already changed our plans, we decided to follow our hearts and to head to the beach. I will soon write a post about all our little ups and downs of Cuba, stay tuned to find out more! 🙂

Whilst Sacha is in the plane direction Vancouver, we spent the day at the Varadero Iberostar; the all-inclusive we stayed at back in November. It wasn’t our first time at the hotel, so I can confirm it is a nice all-inclusive. The service is great, the food is good (for Cuban food standard), the beach and the ocean are to die for.

Same schedule different day! We spend the day at the beach with the kids at our all-inclusive in Varadero; Iberostar. After dinner, we drove down to our last casa of the trip in Boca de Camarioca.

During the morning, we visited Matanzas and then we went to Varadero for dinner, but also to see a little bit more of the city. We had dinner at Salsa Suarez’s restaurant. One of the best meals we had on the trip, but the service was bad. During the evening, we went down to the beach in Boca de Camarioca (thank god for the car (!) we got to see a lot more).

It’s time to go back to Quebec City. On our way to the airport, we drove around the beach to enjoy some more views. Then, we dropped off the car and flew back to the cold weather, but also to home (Oh! the feeling of being home!).

Cuba is a beautiful country to visit, explore and discover. It also was an experience in itself on the human side for us as much as it was for them. I will soon write about my thoughts and experience on the subject, stay tuned ;).

We are two sisters from Quebec and we are currently both at the extremity of our beautiful country, Canada. We created this blog to align and explore our individual strengths together.

Read More
A couple months ago, my boyfriend and I took our 2 toddlers for an all-inclusive vacation. I say…
Read More
0
0
0