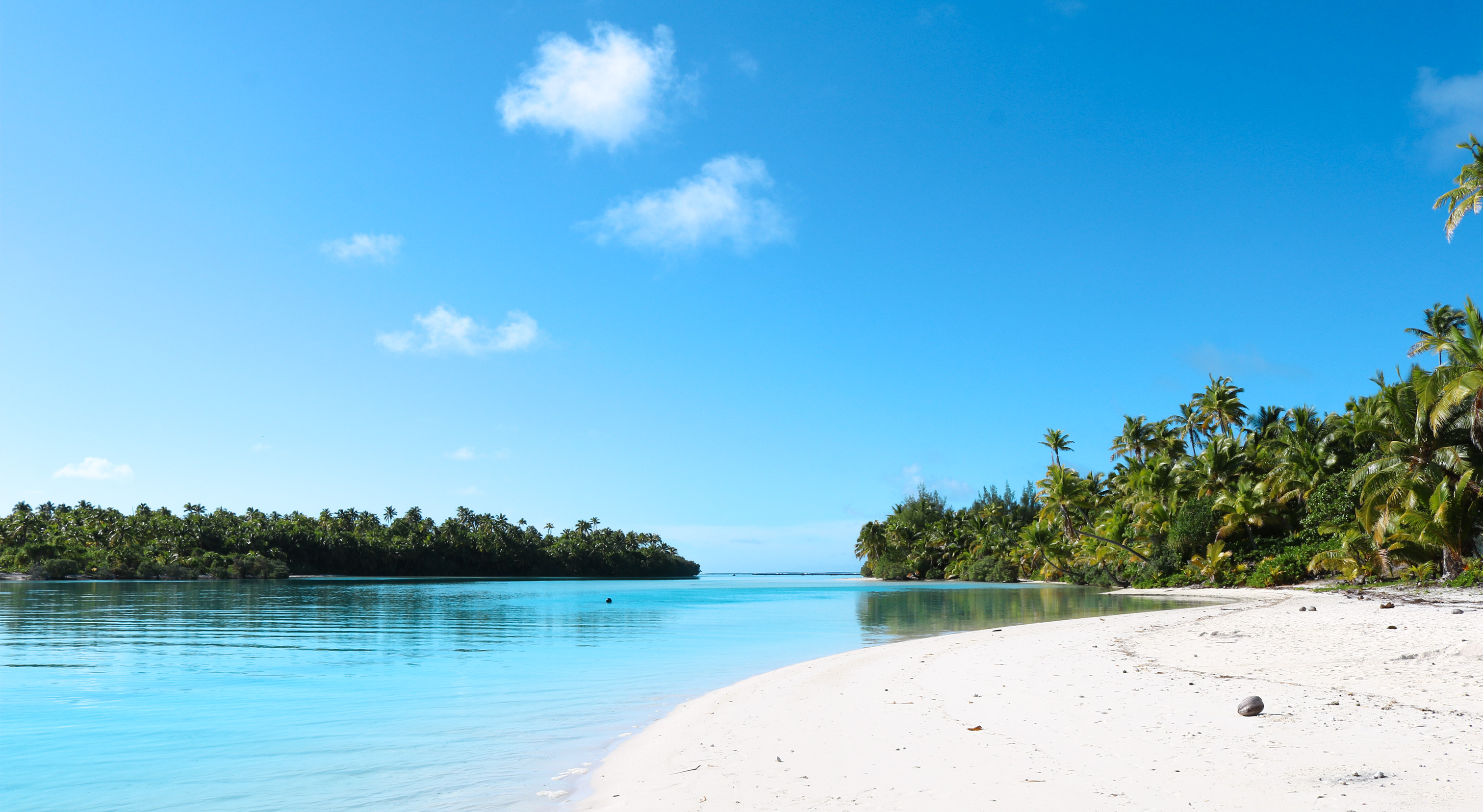 My trip to the Cook Islands: Aitutaki

You may have seen recently that the boyfriend and I went to the Cook Islands. We visited two of the islands; Rarotonga and Aitutaki. As both islands were so unique, I’ve decided to write about each one separately. For now, let’s go to Aitutaki!

After a short layover in Rarotonga, we flew to Aitutaki! Our flight was scheduled for 6:30 in the morning. At around 6:45, we were still in the waiting room when the captain finally came to get us to begin boarding the plane. We were eight passengers in total. The technique used to monitor our personal belongings was actually, “Can you show me the size of your bag?” A technique rarely used in North America! Forget the metal detector or the body scan. No, no! All we want to know is how much luggage you’re bringing on board! #lol A couple even boarded the plane with their hand saw. It was very old school!

After the captain gave us a short safety briefing, which sounded like, “The only safety exit is located at the front of the plane, hold on tight and enjoy the bumpy ride.” #ReLol We were on our way to Aitutaki. And I can tell you that he wasn’t wrong. Despite the weather that was on our side, the fact remains that we were in an eight-passenger mini-airplane in the middle of the Pacific Ocean, so let’s say it was a very bumpy ride!

Aitutaki Island is a short flight away from Rarotonga (50 minutes). This small island, with a total area of 16.2 km, is surrounded by about 15 mini-islands. It also has one of the most beautiful lagoons in the world. In fact, it’s quite special when you fly over Aitutaki island as you can clearly see the separation created by the coral reef in between the ocean and the lagoon. Just flying over the island is worth the trip as it’s so impressive to see.

Air Rarotonga is the only company that offers flights between the different islands of the Cook Islands. Prices are quite expensive considering the flight time. We paid $400 CAD per person round trip from Rarotonga to Aitutaki. We hesitated long before purchasing our flights as we were hoping to see prices drop, but they maintained for months. You definitely need to budget for it, but I strongly recommend it!

A tour of the islands

The island of Aitutaki is known around the globe for its stunning and super large lagoon. And I must say it’s quite impressive to see. There are several companies that offer tours of the lagoon and of the small islands. Most of the companies offering a tour of the islands tend to create a “show” out of it. They take you to an island, sing Mauri songs, cook a feast on the BBQ, and take you back to the main island a couple of hours later. We were far from being interested in this type of tour. Instead, we opted for a private tour of the lagoon with our host. We were a small crew, only four adults, and two children, but we had the most fun. Our host gave us a breathtaking tour of the lagoon.

First, we visited One Foot Island, which is actually where Survivor was filmed. On that island, we were left to ourselves to explore our surroundings, while our host went to pick fresh coconuts from the trees. Then we went to Heaven Island, which is a soon to be an island as for now it’s only a large sandbank but give it 15 to 20 years and it will be a true island!

Then we went around several islands and saw rays dancing in the lagoon, a small turtle, and a number of other fish.

And then the moment we were all waiting for was here, we went snorkeling right beside the coral reef. The current was very strong, which made the dive more difficult than we had wished for. We saw beautiful and flamboyant purple coral and all kinds of colourful fish, big and small.

The tour continued with always more snorkeling, where we swam with giant trevally and Napoleon fish. It was a unique experience!

Given the size of the island, a bike ride is the activity of choice! It allows you to discover the beaches and to stop wherever you wish to. If you’re looking for downtown Aitutaki, don’t even try as all there are 3 corner stores! #lol

For us, snorkeling in the morning, during the afternoon or when before the apero was a must. Later on, in this post, I’ll tell you more about the best part of the island for snorkeling.

After all, it’s a beach destination, so take the opportunity to relax, read a book, lay on the beach and live in the present moment!

Having done a lot of research on the best places to stay in Aitutaki, I strongly recommend you stay in the northwest part of the island. It’s actually where you can find the most beautiful part of the lagoon around the main island.  It’s also where you can experience the best snorkeling accessible from the main island. There are several hotels available on that side of the island such as Pacific Resort Aitutaki ($$$), Paradise Cove Island ($$$), Tamanu Beach ($$$) or Matriki Beach hut ($). This is where we stayed, and it was awesome!

To be honest, you get pretty good value for your money. The beach huts are located on the same beach as all these five-star hotels. The only difference is that you sleep in a rustic beach hut. Having a perfectly located beach hut that allows you to get out of bed and jump into the ocean is an asset! And the Matriki Beach Huts are perfectly made for that! The beach huts don’t have proper windows, but instead mosquito nets. What we loved the most was the outdoor shower as we could shower under the stars hidden behind the palm trees. It was magical! I like marble shower, but to me, there is nothing better than a romantic outdoor shower! 😉

Food is very expensive and it’s a little bit of what we expect when visiting such a remote island. We found very good fruits such as fresh bananas, star fruits and coconut bread at the Tauono Market, which was just steps away from the Matriki Beach Huts. A fellow Canadian, who moved to the Cook Islands many years ago, is the brain behind the operation, she cultivates and sells the fruits from her home.

In Aitutaki, corner stores are their grocery stores. They sell a lot of bulk products and a handful of fresh vegetables. Most of their products are imported from New Zealand or Australia. We loved that they sell New Zeland’s meat pie as you can grab them on the go!

For our first night in Aitutaki and to celebrate our engagement, we went to the Tamanu Hotel restaurant. We ate very well considering the island’s standards. The fiancé really laughed at me when I began asking questions about their Cabernet Sauvignon. They had about 4 wines on their menu as that’s far from being their specialty. But the Frenchie had to ask!

The following day, we planned to eat at two other restaurants on the island. We wanted to eat at Puffy and Coconut Shack. As both restaurants turned out to be closed and as there was no corner store close by, we ended up eating Tim Tam(chocolate cookies) for dinner. Useless to say we starved all night and by 7:00 the next day I had already eaten my first meat pie.

I always opt for the meat-free option when I can, but I found it very difficult when visiting the Cook Islands. Given the lack of choice in the corner stores and the scarcity of fresh produce, I don’t think I’ve eaten a meatless meal during our trip other than breakfast or smoothies. #SorryOkja

The most popular mode of transportation is the scooter. If you are lucky enough to rent a scooter, I highly recommend it. For our part, we rented bicycles and it was fine knowing the size of the island. In terms of transportation between the airport and the beach hut, often the hosts will offer to pick you up and to drop you off for a small fee (usually $20/person).

Aitutaki Island is the most beautiful place I have ever seen. Now, I’m afraid to travel elsewhere as I feel I will be disappointed after seeing such beauty.

Usually, the flight from Canada to the Cook Islands sells for $2,000 round-trip. Although during Cyber Monday, we got a massive deal and the flights went down to $650. It was so worth it! If you ever see a deal like this one, you must jump on it for an unforgettable trip to the stunning Cook Islands!

Read More
A couple months ago, my boyfriend and I took our 2 toddlers for an all-inclusive vacation. I say…
Read More
0
0
0